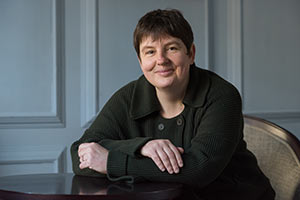 Emma Smith was born in Leeds and went ‘unexpectedly’ to the University of Oxford, where today she is Professor of Shakespeare Studies at Hertford College. She often works with actors and directors as a production advisor at the Royal Shakespeare Company, the National Theatre and the Donmar Warehouse. Her 2018 BBC Radio 3 series Binary and Beyond was ‘stimulating’ (Guardian), ‘illuminating and lovely’ (The Times). In 2016 she was called upon to authenticate a copy of Shakespeare’s First Folio found on the Scottish isle of Bute. Her critically-acclaimed podcast series Approaching Shakespeare has had more than 650,000 downloads around the world. She also enjoys silent films, birdwatching, and fast cars.